I feel I would be remiss if I did not introduce you to one of Jack Chick's most infamous creations, Bob Williams.  Generally, Chick tracts do not have recurring characters save for Scary Faceless God and Satan.  However, there are two series within his overall tract catalog that break this pattern: the Li'l Suzy tracts, aimed at children and headed by the titular Suzy (who is supposed to be sweet and cute but comes off as a homophobic, xenophobic, bullying little monster) and the Bible Stories series of tracts, headed by Bob Williams.

Who is Bob Williams?  A smug, fanatical computer repairman who has the (possibly demonic) power to convert most anyone he meets.  He is so prolific that he proselytizes in twenty-five tracts.  What compelling arguments must he make to warrant being such a major presence in Chick's oeuvre?  Let's find out in his debut story!

In the beginning, giraffes and apatosauruses had a contest to see whose neck was the longest, and the apatosaurus won.  Then the giraffes were such sore losers that they stood on each other's shoulders until they reached the asteroid belt by Mars and knocked one such asteroid into the Earth, driving the dinosaurs into extinction.  Giraffes are hardcore.

Why is Mary Crying?

If you are anything like my mother, when you read the dissection for the 2013 rewrite of The Last Generation, in between laughing at the ridiculousness of everything in the tract, you may have asked why Chick kept Mary around as the Mother Goddess when that future decried Jesus.

Well, this tract answers that.  And regardless of whether you're an atheist, a non-Christian, a Catholic, or even a Christian who rejects the immaculate conception and veneration of Mary, it will still be an incredibly stupid answer.

For bonus points, we'll also get a glimpse of Chick's massive issues with women!

In the 1972 edition of Jack Chick's asinine attempt to be George Orwell, the plot more or less stayed consistent.  In the future, America will be overrun by a pseudo-Christian theocracy that will torture and kill those who believe in the divinity of Jesus.

So sit back and hold on tight, because it's a Last Generation for, uh, the new generation.

The New World Order isn't messing around anymore!  Gone is the ocean and in is the saturated green.  But forty-one years later and they still can't finish his hat.  On the plus side, the curve of that snake and the green color make him look sort of like a KKK Riddler if you squint, and everyone loves the Riddler.

In my dissection of Somebody Goofed, I mentioned that certain Chick tracts are occasionally updated and reprinted.  In Somebody Goofed, the tract was virtually unchanged, right down to the 1960s pop culture references.  But this isn't always the case.  Sometimes fonts are changed to be more legible, current issues are added in - in the 1980s, the tract That Crazy Guy! was changed from being about immoral sex leading to herpes to cover immoral sex leading to AIDS - and the art is revised.

And sometimes, as in the case of The Last Generation, the entire plot is altered based on what Jack Chick's pet issues are at the time.  While the publication from 1972 is as ludicrous as the version of Chick's site today, the deterioration of his writing and plot are clear to see between the two versions.

I am going by scans of an older tract, so these images will not be as clear as in other posts.

Big Brother's nightmarish world order is just around the corner.  Christ is coming soon for believers.  Will you be left behind?

Somehow, I don't think George Orwell had the imaginary persecution of Christian fundamentalists in mind when he wrote 1984. 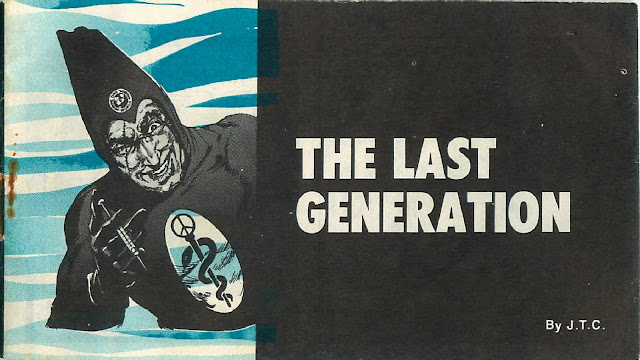 This is one of the tracts drawn by Fred Carter, the other artist for the company.  He's far more talented than Chick himself.

It's like he threw every EVIL cliche he could into one cover.  KKK, United Nations, drugs, a peace symbol (which is really the sign of the Antichrist!  Booga booga!) and a doctor's symbol.  Wait, what's evil about doctor's staffs?  Is it that psychiatry generally doesn't advocate taking a rod to your child?  And why is the top of his pointy hat cut off when there's plenty more cover above him?  And why does he appear to be standing in the ocean?

Gunslinger was published in 1997.  Flight 144 was published in 1998.  In just one year, Chick managed to produce a tract that completely contradicted everything about Gunslinger.  Flight 144 is meant to be another argument for sola fide, or faith alone, the theological position that good works do not bring you into Heaven.  Instead, it ends up being an argument for running like hell away from Jack Chick's idea of God.

A couple spends 50 years on the mission field, trusting in their good works. But when they die and stand before God, they learn that good works can’t save… only Jesus can.

Originally I was going to make my next dissection about a tract attacking Islam or Catholicism or something, just to display Chick's blatant lies and total hypocrisy.  But I feel I would be remiss if I did not first introduce you to Jack's completely ludicrous take on the concept of "for by grace you have been saved" and how it makes the theme of salvation from tract to tract entirely contradictory.  So today's dissection will be Gunslinger, followed by a dissection of Flight 144, to demonstrate Chick's inability to keep his views consistent and display how horrific his vision of God is.

A hired killer trusts Christ and, at death, goes to heaven.  But the law-abiding marshal who hunted him rejects Christ and goes to hell.  Clearly shows that salvation is through grace, not works.

Is that steam shooting out of his ears?  I'd be pretty angry too if I had no neck, a hole through one ear, and a face that could curdle milk.

Since my first dissection covered one of Chick's oldest tracts, here's one of his newer works from 2007.  This is the description of Fairy Tales from Jack Chick's website:

They were just fantasy games … all in fun. But they influenced Harry to make the biggest mistake of his life.


What dastardly games are these?  No, not Dungeons & Dragons or Harry Potter, as you may be thinking.  That would be too logical.  Also, he's already made tracts denouncing those.

Before we begin, I would like to mention in the mid-nineties, Chick suffered a stroke.  The effect on his art and writing afterward is, in my opinion, pretty noticeable.

In other news, Chick likes to take swipes at gay people regardless of whether or not they're relevant to the content of the tract.  Here, they're not, but get it?  "Fairy" can mean gay!  Isn't that clever?

Somebody Goofed was initially published in either 1966 or 1969 (I've found contrasting sources, and it's possibly even older than that).  Despite most of Chick's more moderate comics coming out during this time, it still bears all the classic signs of a Chick tract: making the villains repulsive so we will presumably find their beliefs equally repulsive, dialogue no one would ever say, rabid anti-Christianity, and a sudden turn into madness.

The description from Chick Publications:

A young man goofs when he is talked out of receiving Jesus as Saviour.

Jack Chick: An Introduction to Insanity


It was 2007.  I was behind the counter at the movie theater, watching the minutes tick by until people would come in for the next showing and there’d be something to do.  The counters were wiped down, drinks and candy restocked, new batches of popcorn whirring in the machines, the lobby vacuumed – everything was taken care of.  There was nothing to do and nothing to talk about.

That is, until Amy came back from cleaning up trash in the parking lot.  She’d found two little comic books, three inches high and five inches wide, twenty pages each.  One bore a yellow cover and the title The Little Bride, the other, a purple cover reading Kidnapped!.  She’d glanced at them briefly outside and decided they had to be brought in.  And boy, was she right.  We spent so much time staring at them that our boss had to give us a lecture on focusing on our jobs.

Here are some of the many lessons I learned just from those two comics:

If the police catch you beating your husband with household items, you won’t be charged or even have an official warning so long as you promise to go back to church.  However, the same police officer will pull you over for driving over the double yellow line on the road just once.  Children walking home alone will be immediately kidnapped, but children walking to a stranger’s house without their parents in the morning to talk about religion will be just fine.

The prophet Muhammad was a pedophile, and living in a different time period is no excuse.  There are “magic words” that will make you a Muslim forever if you say them even once.  When you pray, God speaks directly to you through a ray of light and provides advice that you should have had the common sense to figure out already.  Metaphors do not exist.  And most importantly, shouting “GOD’S GOING TO GET YOU FOR THIS!” at your kidnapper will drive him into a panic.

I wouldn’t learn until a few days later, when we had free time in English class and I did some Googling, that I’d been introduced to Chick tracts:  little comics containing evangelical messages put out by fundamentalist writer/artist Jack T. Chick.  They are anti-evolution, anti-rock and roll, anti-ecumenical movement, anti-homosexuality, anti-Santa, anti-everything.
Chick, who is reclusive and mostly a figure of mystery, published his first tract, Why No Revival?, in 1961.  Since that time, Chick Publications – classified as an active hate group by the Southern Poverty Law Center – has produced over 230 comic tracts in addition to other books and films, and printed over 800 million tracts.  Jack Chick is the most published comic author in the world.

Chick tracts have developed a cult following among non-fundamentalists for their ludicrous plotlines, terrible art, stilted dialogue, contradictions, and their poorly researched, often offensive themes.  The tracts are meant to be passed on indefinitely, with a person reading one, accepting Christ as their savior, and handing it off to another.  However, many people collect them for their entertainment value, and it’s easy to see why.

There are a number of hilarious websites dedicated to dissecting Chick tracts panel by panel, such as Enter the Jabberwock, Holeee Cow, and Boolean Union.  I’ve enjoyed both their dissections and the ridiculous tracts themselves for years, and want to throw my hat in the ring of mockery, beginning with one of the oldest, most well-known tracts, Somebody Goofed.

As a disclaimer, I don’t care what anyone’s religious beliefs (or lack thereof) are, so long as they’re not trying to force those beliefs (or lack thereof) on others, trying to make their views on theology into law, or using their views as an excuse for discrimination and hatred.  The point of these dissections will not be to mock or attempt to disprove Christianity.  The point of these dissections is to laugh at the absurdity and point out the flawed logic.

So sit back, grab the popcorn, and enter the nightmare world of Jack T. Chick.